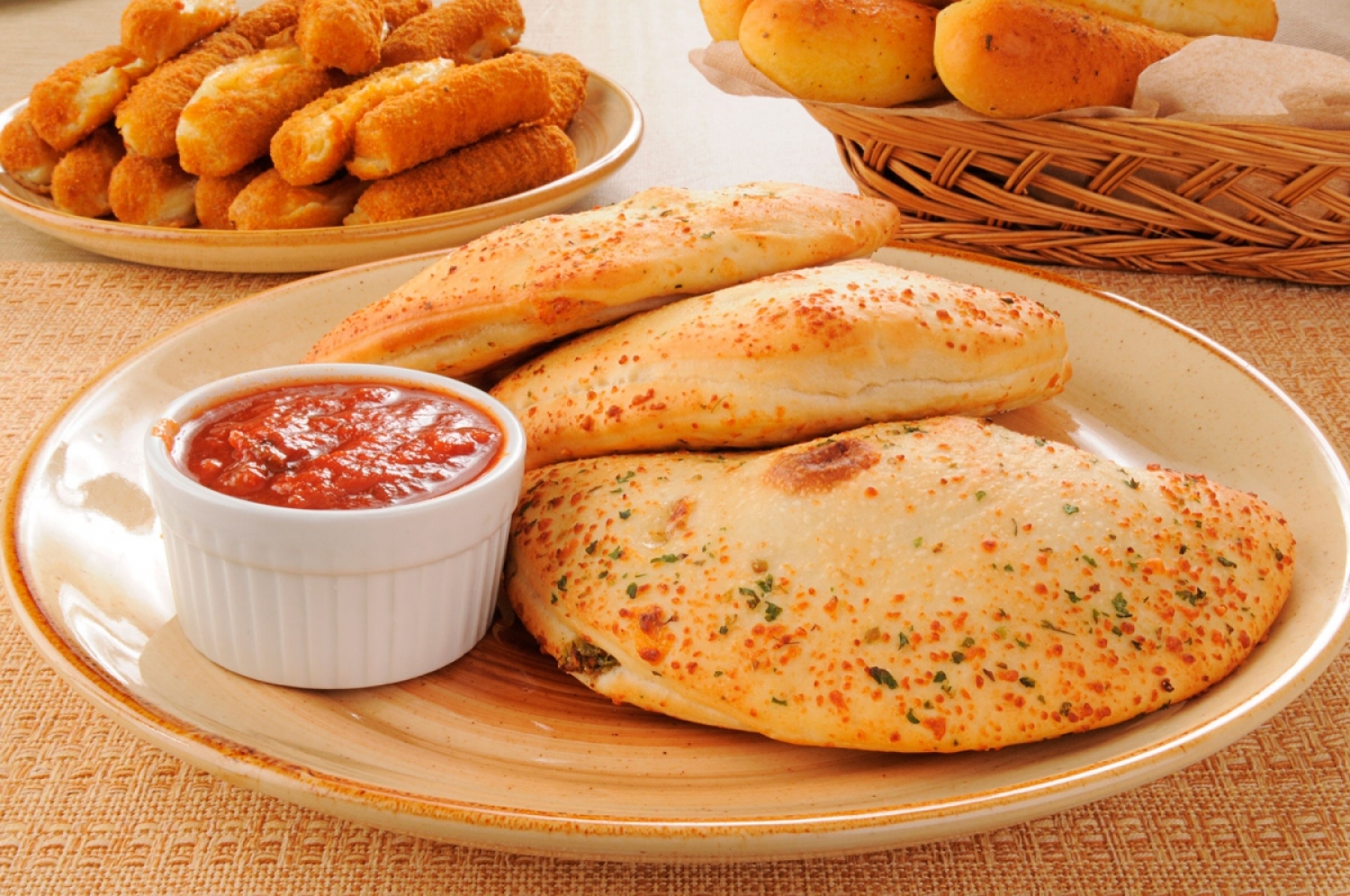 We are all used to the fact that the standard pizza must necessarily be round and have 30 cm in diameter. However, the preparation of this national Italian dish has become so popular that the demand for it is constantly growing, and the inventive pizza-yolo decided to come up with several new types of food that many loved. If you consider yourself rightfully a gourmet and a connoisseur of Italian cuisine, you should know exactly what you are offered in pizzerias under mysterious names like calzone or pizza roll.

In Ukrainian pizzerias very often you can find this kind of pizza, like calzone. The appearance of such a closed pie resembles a crescent shaped cake. Inside is a typical for the traditional dish filling: dried tomatoes, basil or mozzarella. However, fastidious customers are increasingly demanding something original and unusual. Therefore, the calzone is even sweet, but such an unusual dessert has not become so popular as a traditional dish with tomatoes and basil.

To prepare the calzone is also used dough, as for pizza. A circle is rolled out, one part of which is filled (a lot of stuffing). Then the filling is covered with the second part of the circle from the dough and baked. This snack is much more convenient in the way - this pizza is more of an option for one person, not for the company. By the way, in its homeland, in Italy, the calzone is called panzarotto. 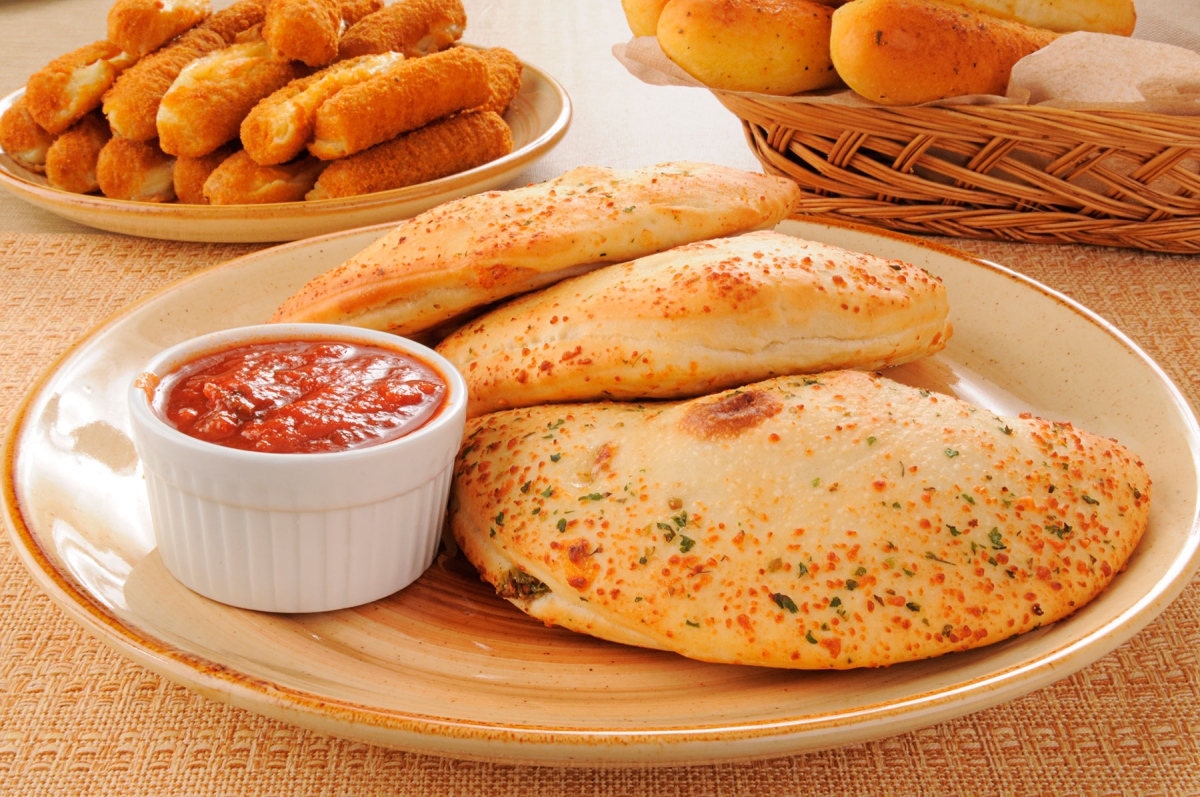 But the calzone is just the beginning. Have you ever tried a spit pizza? This is an unconventional dish, but rather an invention of modern culinary specialists. It is much more convenient to eat as one person, and noisy company of close friends. Looks like an item like a pigtail made from a traditional pizza dough, stuffed inside.

Initially, the braid was made only with a filling of pepperoni and solid viscous cheese. A couple spoonfuls of tomato sauce and basil - and here flavors are already making gourmets crazy. But today the species of this dish is much larger. The name has remained unchanged, and the fillings are quite diverse: salami, chicken, vegetables, olives. This dish is prepared quite simply: a rectangular dough is cut at the sides into strips, the filling is put in the center, and the strips are wrapped in the form of a pigtail. From above, when baking, sprinkle this pizza with hard cheese.

If you are so fond of pizza that you can not refuse it, then you can try it in an unusual format - horn. Such a snack is practiced in many countries of the world, where every second counts for a business person. It is prepared quite simply. A small circle of dough is wrapped around the shape of the horn and baked. In the ready-made horn, the traditional filling is formed and sprinkled with hard cheese. Inside the horn there are fillings from tomato and basil, oregano, mozzarella and pepperoni. In such a compact format, almost all types of pizza were moved. Naturally, you can not cook four seasons in a horn. 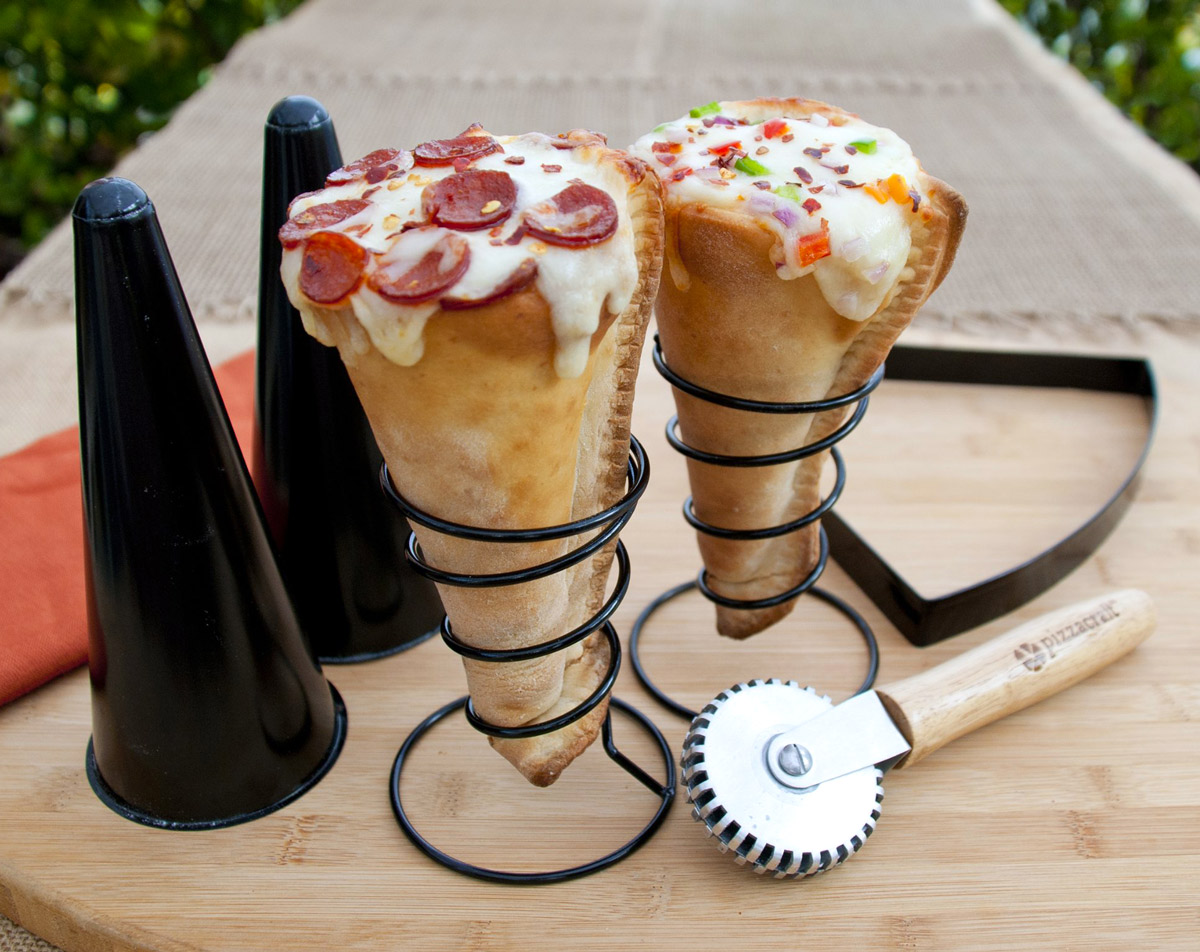 Pizza in the form of a ring is the original solution for a family feast or a friendly get-together. This format looks quite simple: it is a traditional dough ring, inside of which is a filling. When baking crispy crust gives the dish a hard, viscous cheese.

Use in this version, you can also almost any stuffing. Traditionally, the internal walls of the circle are smeared with tomato sauce, then cheese is put, any stuffing, and again - cheese. Only the last layer is already poured onto the dough. The advantages of such a dish - it is very easy to eat in the company. To share a piece, do not necessarily cut it with a special knife - it's enough just to break the dough. At the same time, your hands and clothes will remain perfectly clean. 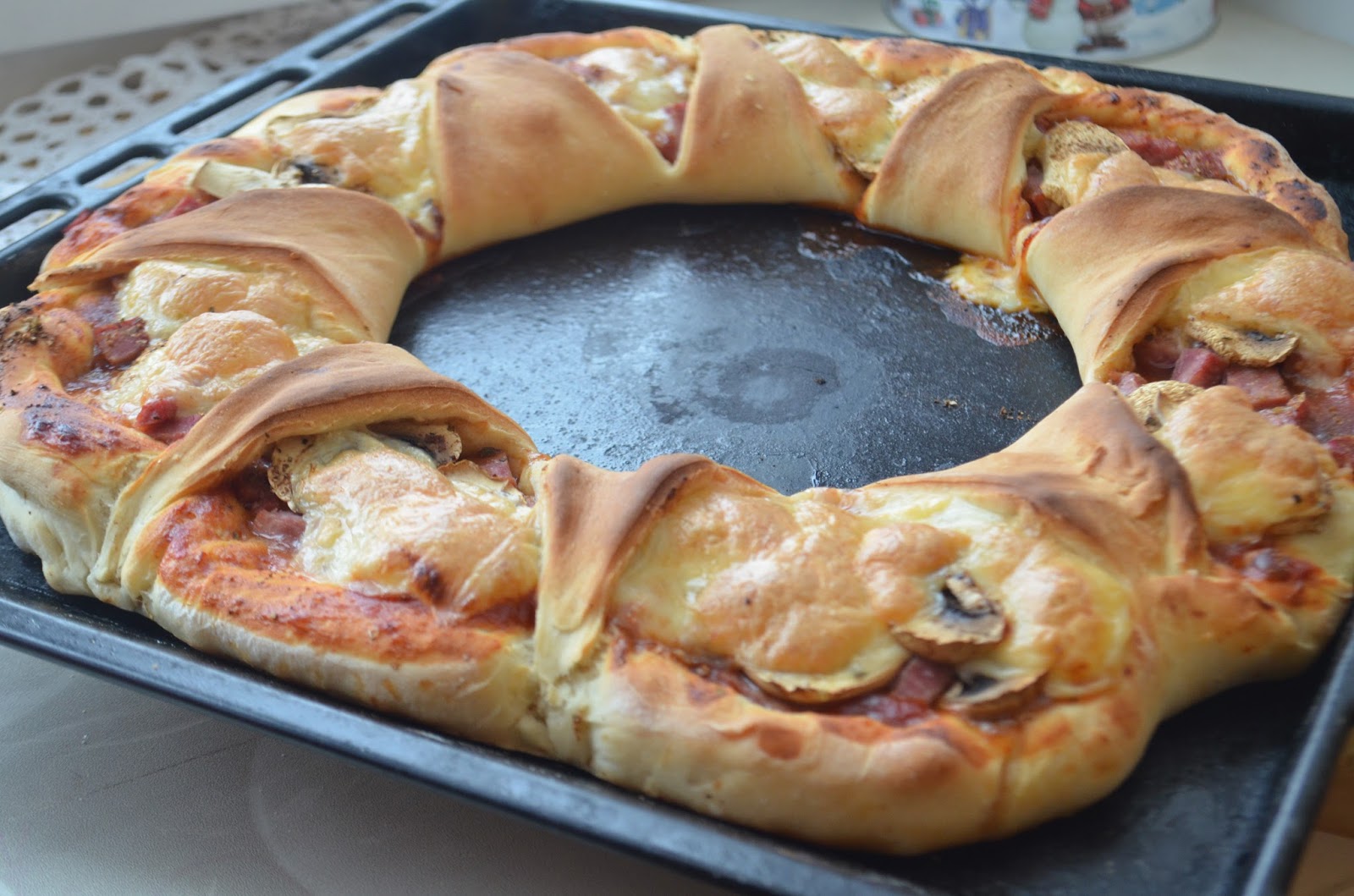 Mass hobby for Japanese cuisine, and especially for sushi, could not bypass the fans of pizza. Instead of standard fish rolls with nori and rice, they offered their own, more habitual alternative - pizza roll. This kind of pizza rather refers to some interpretations of the traditional recipe, but nonetheless, it is popular among those who do not already know how it would be more interesting to serve a traditional dish.

Preparing this pizza roll is very simple. Wide stripes of dough are smeared with stuffing and curled into small rolls. Then put on a baking sheet and bake. All this is sprinkled with hard cheese to form a sticky crispy crust. You can eat a dish in the company with both hands and with the help of cutlery.

Traditional pizza can also be prepared in the form of wafers. This is a double shot for those who do not know what to choose for a quick lunch. Preparing this dish can in several ways. The first is traditional. These are the usual wafers in the waffle iron, inside which is a filling of tomatoes, cheese or pepperoni. However, today the popularity is gaining a slightly different kind of product - the Hong Kong waffles. What is their feature?

They are made on special waffle irons, which allow to make small bubbles in each wafer. The inside of such bubbles is the stuffing. Also, the filling is wrapped inside the wafer itself. Just imagine how many tomatoes, fragrant basil, spicy spicy cheese or spicy pepperoni will be in such a dish! A portion of such Hong Kong delicacy is quite large, and very often one person has too much - you can even get enough to eat. This again, the interpretation of the traditional dish to the needs of modern people: a convenient format allows you not to give up your favorite dish even during a quick lunch lunch.

If you simply adore the traditional Italian dish, but you are confused that during dinner or dinner you always have dirty hands or a table, then PizzaBite will be an ideal solution. Outwardly it looks like a small sandwich or bruschetta. Do not confuse it with just a small piece of your favorite dish - this miniature is baked separately.

The appearance of PizzaBite can be associated with the growth of the popularity of micro-cuisine, where all dishes should decrease in size at least a dozen times. However, this format of the traditional dish is very convenient in many respects - it is very simple to eat as a snack, to choose for a large company. In addition, this format will appeal to the children - it is much more convenient for them to eat a small slice than to get dirty with a large triangle of the traditional format.

The name of the pizza croissant of many just scares. However, this is the perfect mix of French and Italian cuisine, which certainly will not leave modern gourmets indifferent. A traditional croissant of puff pastry with butter is baked. The dough should be airy, soft, but crispy. Inside, instead of the traditional sweet filling is salty.

You can fantasize: only tomato sauce, mozzarella, basil and oregano will be the traditional ingredients of such a dish. Croissant is ideal for breakfast and it can also be perceived as a convenient and quick snack for one person.

Now you know what kinds of pizza are, and the strange names in the pizza menu will no longer embarrass or frighten you. Choose your favorite format of a traditional Italian dish and enjoy it in full! 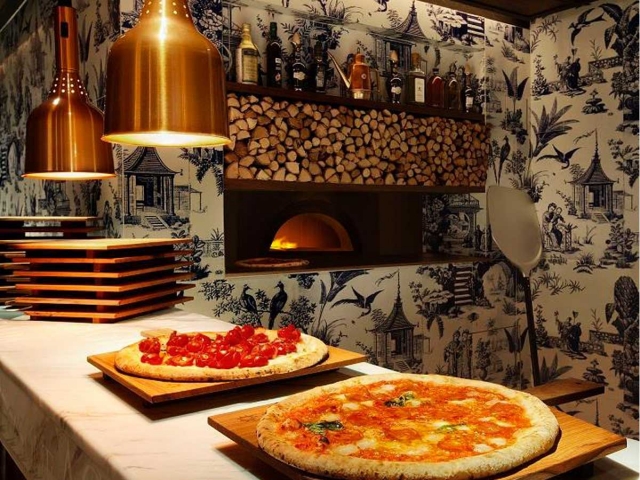 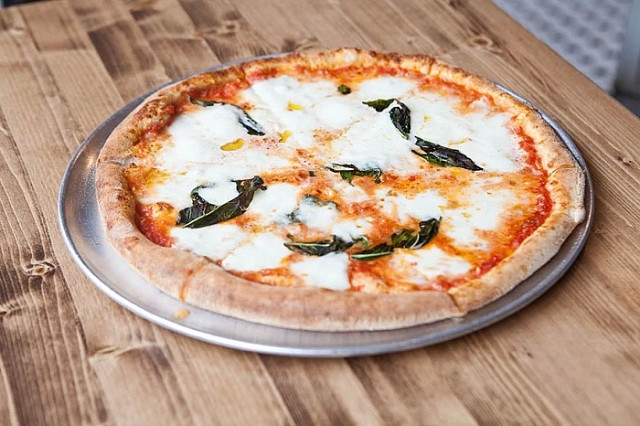